We did not spend much time in Muskegon before we started the long trek to Chicago. While we were there we transformed from a sailboat to a motorboat, and did some final touches before attempting a Lake Michigan crossing with only our engine.

Muskegon to Chicago is an 89 mile crossing that is typically done overnight so you arrive in the city during daylight. Randy and Tari Smith both volunteered to assist us with this crossing. They only had a short timeframe during which they could both join us, and in that time frame there was an awful weather forecast. Tari thrived on this horrible forecast and was excited for us to experience some “real weather”.

After a long day of finishing touches, we left Muskegon around 7 pm and headed into the darkness. As the weather worsened and the black clouds sank in we split up into shifts for the evening. Tari and I went below to rest, while Jessie and Randy took over for the first couple hours. Jessie, for the first time in her entire life, experienced sea sickness. With pitch black skies, rain, wind, waves hitting the us from the side, and absolutely nothing but a foggy compass to focus on,  she spent every 15 minutes of her shift hanging over the stern  losing her breakfast lunch and dinner. Randy suggested she go below to get some ibuprofen. Jessie opens the medicine cabinet, grabbing what she thought was ibuprofen, brought it out to the cockpit where both she and Randy dumped 4 pills into their hands and gulped them down. Shortly after, neither of them could keep their eyes open, and could no longer handle staying awake. Tari and I then came up for our shift. Long story short, Randy and Jessie unknowingly had popped 4 benadryl, not ibuprofen. Oops. This was not figured out until the sun had come up and I saw the bottle in the cockpit. Randy and Jessie slept like babies all through the night while Tari and I roughed it till dawn in a huge storm. Lucky for me, I experienced a beautiful lightning and thunder storm, got tossed around hour after hour, saw my first water spout, and managed not to get sea sick!  The sight of Chicago’s skyline as the sun came up was very comforting, considering we did nothing but hold a compass course the entire evening.

Jessie’s morning shift, after the benadryl incident. Looking like a champion…

Absolutely everything we owned was soaking wet by the time we arrived at Dusable Harbor in Chicago. Yard sale? 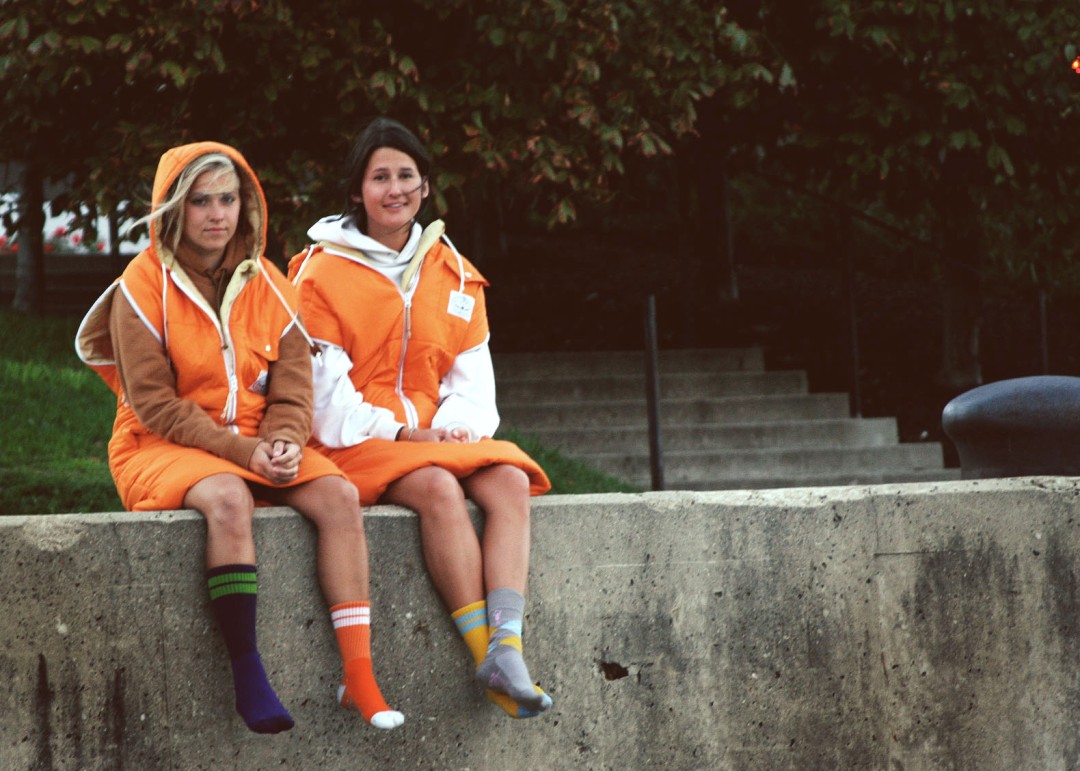 Tired girls. Relax time in our new Poler Napsacks. Sleeping bags that have arm holes, hoods, and an opening at the bottom to tie up by your waist, allowing you to walk around in your sleeping bag! Thanks a lot Poler! Check out Polerstuff.com to see more gear and adventure blogs. 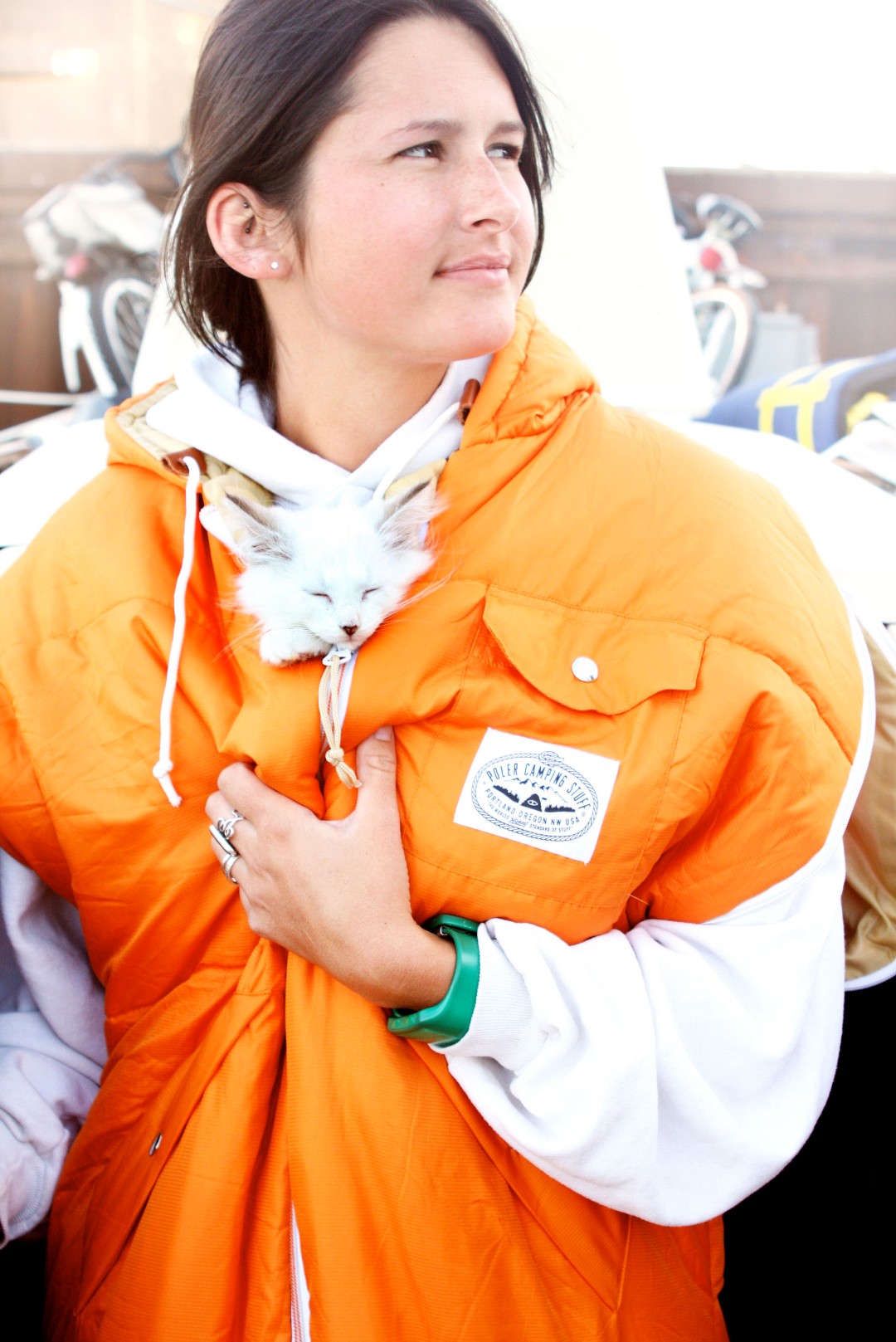 Katie, Bird, and the napsack

A new addition to our family. We picked her up the day we left Muskegon. Her name is Bird. She is a narcolept. 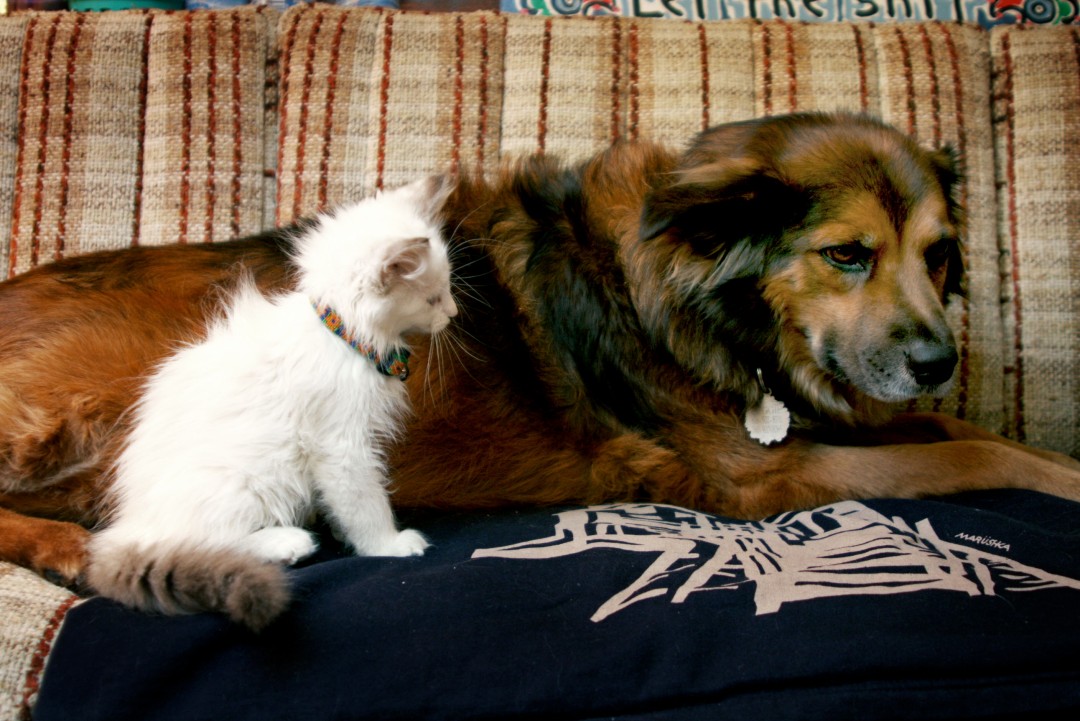 Navigating downtown Chicago via the river was such an awesome experience. A day to never forget. This was the first day we were truly on our own. For the first time we had nobody to answer our questions, nobody to confirm our decisions, nobody to tell us a better way to do something, no schedule, and no time frame. Crazy.