No wonder men have such a hard time understanding women.

“My Imagination doesn’t run wild like It used to. Last time I was here I pretended this rock was my castle, and when I got bored of that I played “animals” with my sister. Now, I’m laying here with my headphones in, feeling like this is completely normal – as if it were my own back yard. Mostly trying to understand how it took us nearly two years to get here.”

“I couldn’t sleep last night because I lay in bed writing a book in my head until it kept me awake so long I had to pick up a real one.”

“I’ve noticed I avoid putting extremely honest words on paper. If I don’t write them – I don’t feel them.”

“There are only three boats anchored here. OH, probably because the wind is hauling ass out of the one direction the books specifically advise you NOT to anchor here in. If sketchy, rocky, windy, and rough channels don’t scare us anymore, I am unsure what does. Not even the spiders we share this house with, the snakes we share our bath with, or the poison ivy we share the woods with.”

“Going home. That’s what scares me.”

“Pissed. I have never been so cold. Neither of us have any more layers to put on. I can’t wait to crawl into a warm home. 2.5 knots into a 15 knot head wind. Why are we even trying? We should turn around. But the thought of backtracking drives me insane. Bad attitude today.”

“We spend the morning whining and bitching, which ultimately made it hilarious because we both know that we don’t have a damn thing to actually whine or bitch about.”

“We tacked back and fourth until were got so frustrated we full throttled dead into the wind and waves to make it to Blind River. We are so stupid.”

“My face is burning. My finger and toes and are in the de-numbing tingling phase. I am done.”

“Katie got so pissed at me when we walked into the town of Blind River. She is scary when she is pissed, and not worth arguing with. It all had to do with “who had the right directions to get into town.” She thought she was right, I thought I was right, and when I was trying to make light of the situation she said she didn’t want to talk about it anymore. But the way in which the words came out of her mouth, “I don’t want to talk about it anymore” was like a gun shot to the chest. We can’t get along all the time. This is the final stretch. We are bound to break at some point”

“The sky is icy blue, not a cloud in it. The breeze is on the nose again but no stronger than I could push air out of my own lungs. We are both dressed like we are about to go flying down a ski hill. If I close me eyes I am on a chairlift, but I left my mittens at home.”

“We don’t sleep anymore. We have become goo brains whose minds are running marathons through deserts, mountains, and valleys and apparently Great Lakes.”

“Only a matter of hours until we cross the imaginary line that separates two countries.”

“Patrick is driving today. I am so cozy in the cockpit after bringing my entire bed outside. Both of us have a book in hand, and feel the need to be nowhere else. If I am not okay with anything, it is that I have spent my last days unable to talk myself out of a crappy attitude. Look at where I am.”

“I think every day that I write I contradict myself. I make no sense. No wonder men have such a hard time understanding women.”

“The customs man showed up in his combat boots and gun on his hip. If not for his costume he would come across as a very nice man, but the suit beefs him up to be a tough action figure. He didn’t go anywhere besides the cockpit. I was nervous he was going to inspect the plumbing. It’s been broken for some time. If we were to get hit with a ticket for that, it’s on me because I am technically the plumber in this here house.”

“Less than 100 miles from crossing our wake and we are stuck in a town called DeTour, Michigan. How Ironic” – Katie

“Lake Huron was not welcoming this morning. The waves grew larger. The rain fell harder. The wind wanted us to stay in Canada. We were in no mood to experiment.”

“Every once and a while we make good decisions. Like to tie up here in DeTour. A thunderstorm kept us wide-eyed and wired for 4 hours and the thought of being anywhere but here was disturbing. It’s the loudest and most intense thunder I have heard since being in the Bahamas. Thunder crackled so loud I felt like I was laying inside an egg shell that could crack open at any moment.”

“Our goal is to make it to Mackinaw Island by Monday, where we will meet our mothers who will arrive via ferry. We have two days, and it looks as though a weather window will get us there with ease. I have not seen my Mom since Christmas. Enough stuff has happened between then and now it feels like years.”

“Docked in Cedarville next to Uncle Dave and Aunt Connie. How wonderful it feels to reunite with these friends who helped us get ready for this trip since day one. I love them. Now I truly feel close to home.”

“Mother nature was so bi-polar yesterday. Waves. Rain. Fog. Sun. Heat. No rain. No clouds. Flat water. More rain. More waves. And then sun again. Mother Nature and I are on the same level – all over the freakin place.”

“At one point today we cruised at 6 knots, sails up, calm glassy rollers pushing us forward, warm air and sunshine. And for a moment, I never wanted it to end. I knew where I was, I knew who I was, I knew exactly what I wanted. It has been a long time since I had that feeling, I forgot it could exist.”

“The rain started falling. Hard. But it was warm rain. I turned the music up louder as the rain fell harder. I loved every drop.”

“We sailed into Mackinac at the exact same time our Mothers came flying in on the ferry. When we saw the ferry coming we turned around to parallel them. The moment we spotted two little ladies jumping up and down in the top deck flailing their arms, Katie and I both started jumping up and down laughing and crying at the same time. Within seconds the wake of the ferry rocked us so hard we both fell over and disappeared into the waves and laughed even harder. It never crossed my mind I might cry when seeing my Mom after all this time – but obviously her being there meant more to me than I realized. ” 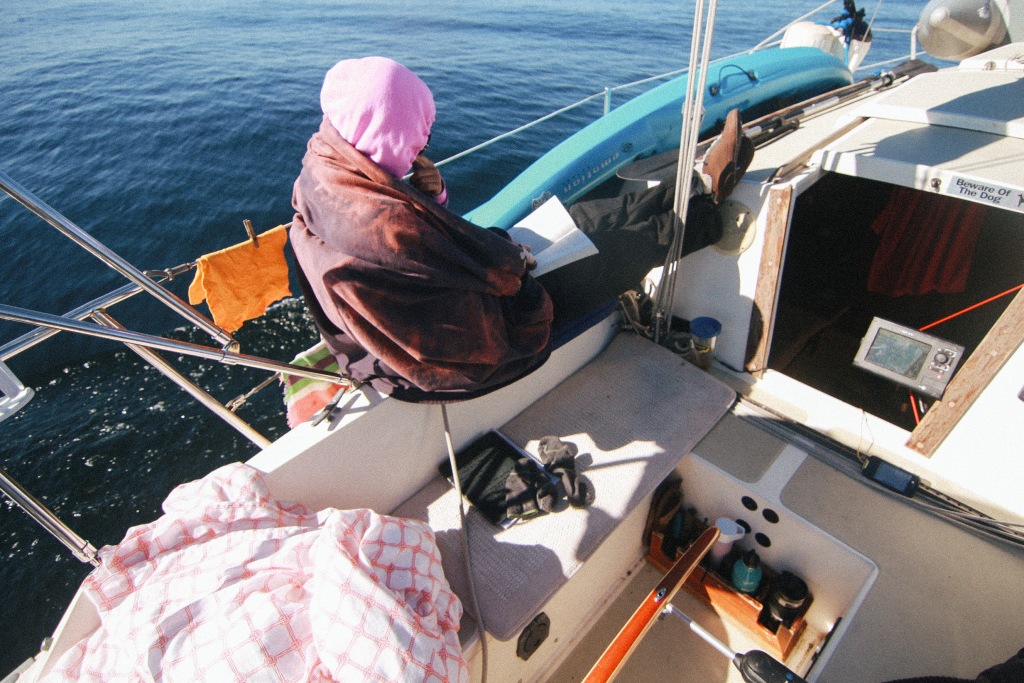 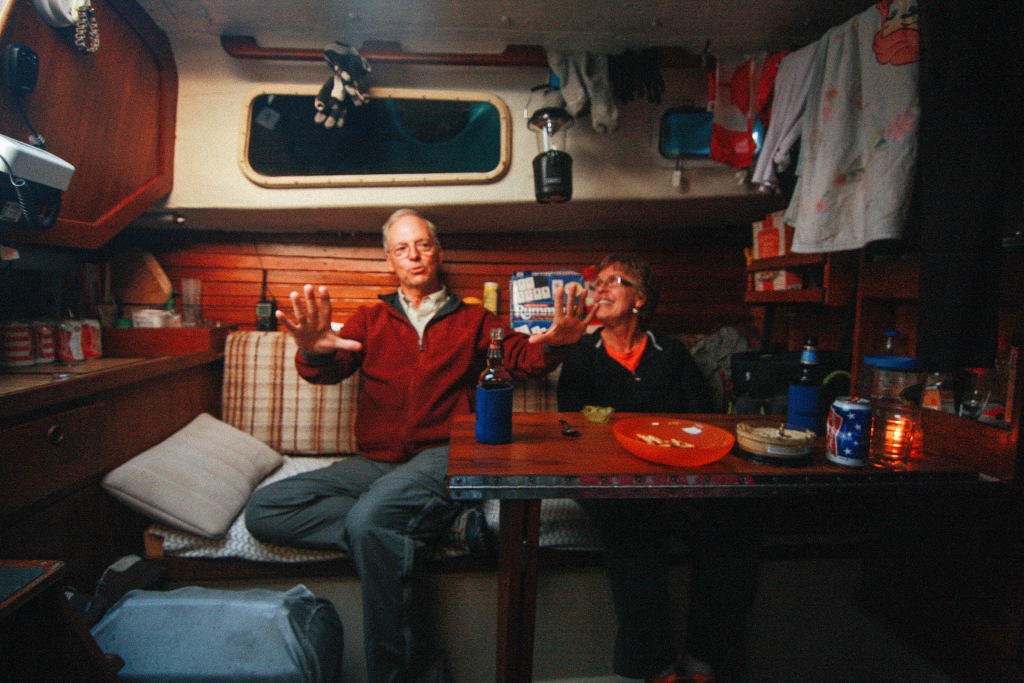 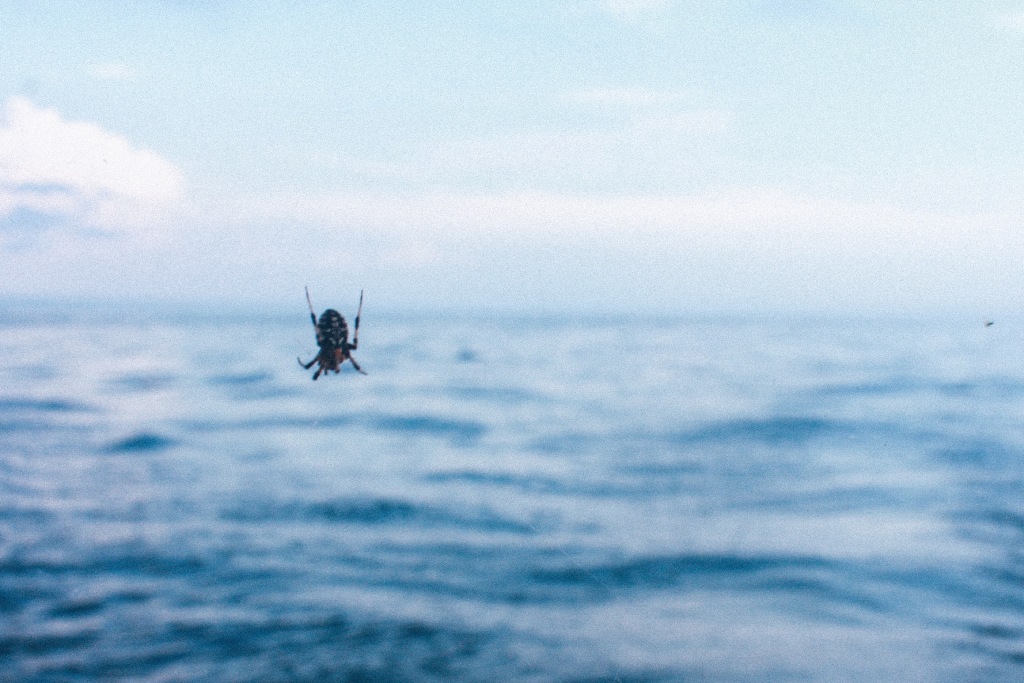 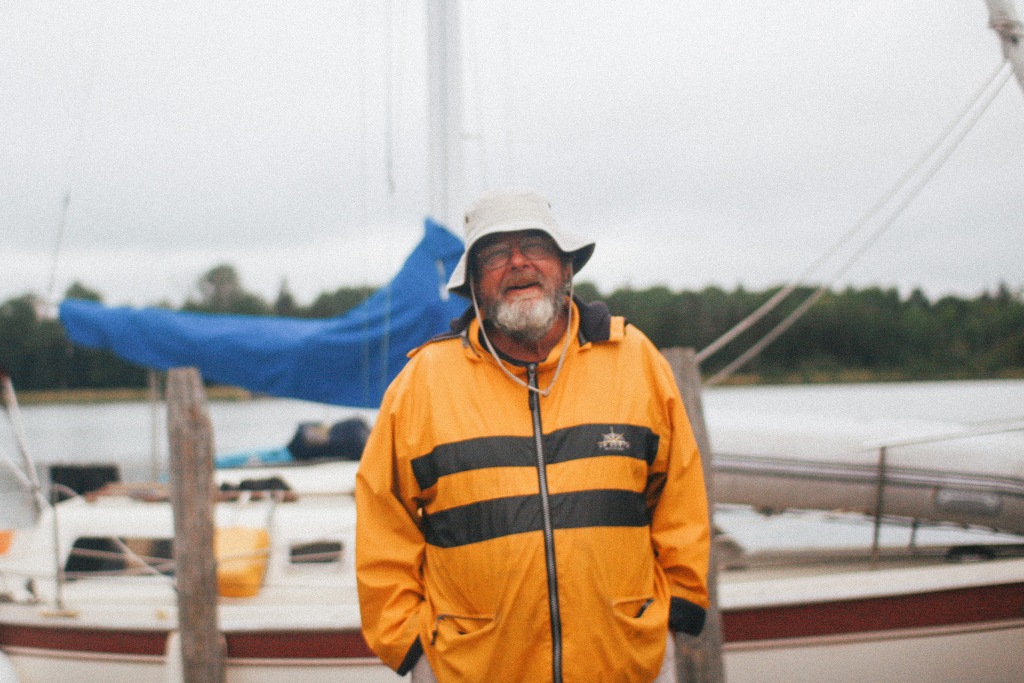 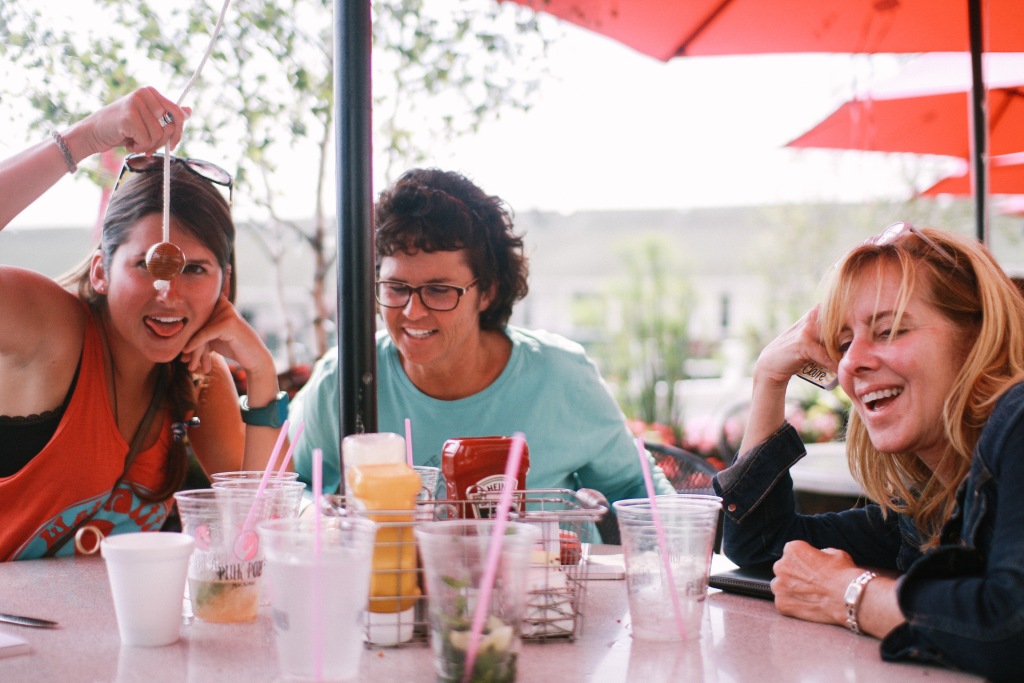 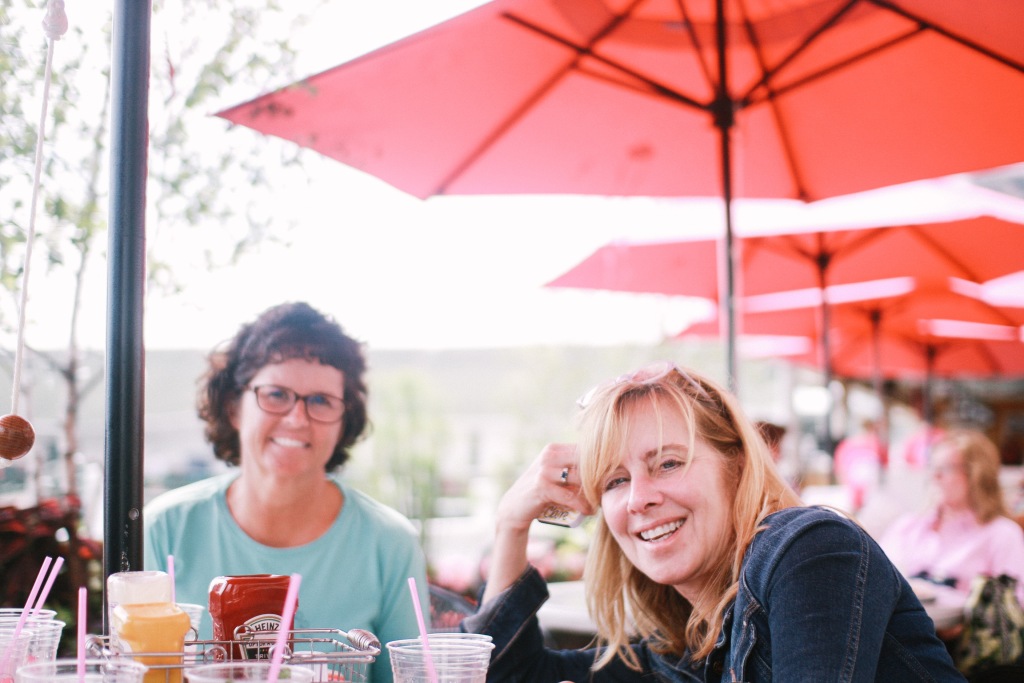 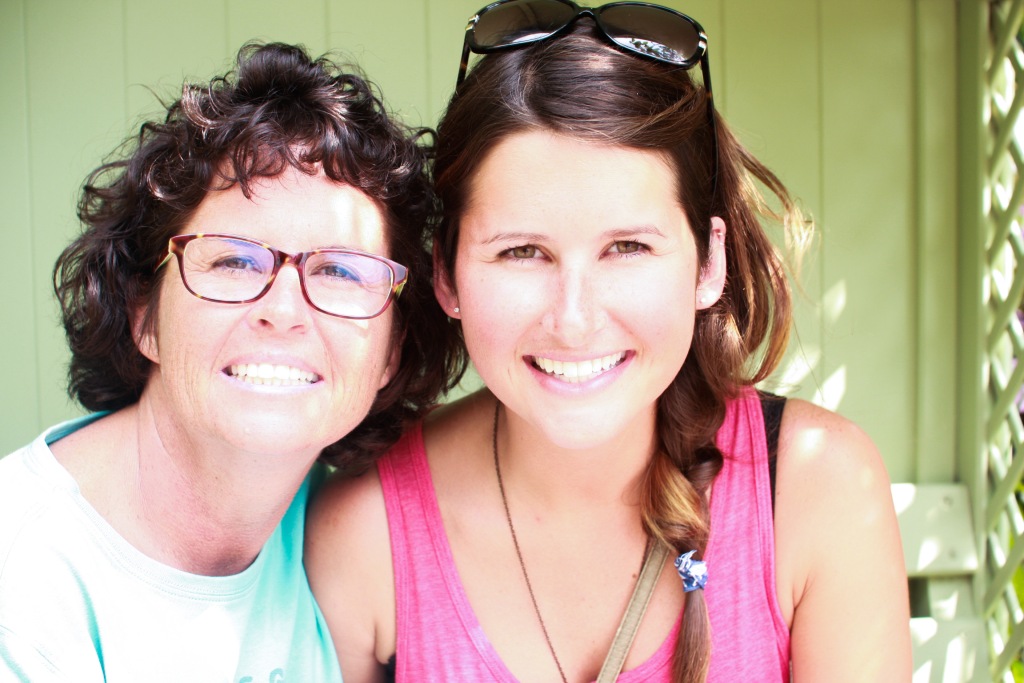 23 thoughts on “No wonder men have such a hard time understanding women.”